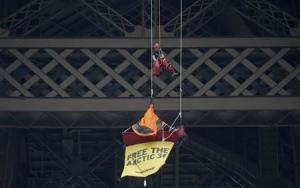 After lowering himself from the second tier of the Paris landmark, the man unfurled a large yellow sign saying: “Free the Arctic 30.” He was brought down about two hours later by firemen without incident.

Twenty-eight Greenpeace activists and two journalists were arrested last month after trying to scale a Gazprom oil platform off Russia’s northern coast, the country’s first offshore oil platform in the Arctic.
Original charges of piracy against the group were lessened on Wednesday to hooliganism, which still carry a maximum sentence of seven years in prison.

“We’re here to ask the French government to do everything in their power to get the release of the 28 activists and two journalists who have been in jail in Russia for 38 days now,” Greenpeace France member Cyrille Cormier said.

The group wants French Prime Minister Jean-Marc Ayrault to press for the group’s release when he meets Russian President Vladimir Putin next week.

The media stunt in Paris accompanies a campaign in the metro, where posters show the activists in a small inflatable boat alongside the massive oil platform. Some rappel up its sides.

“They are powerful. We are determined,” reads the poster.