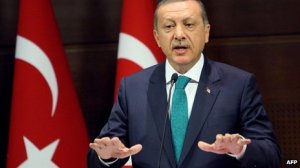 He has proposed lowering the 10% electoral threshold, which currently prevents Kurdish and other smaller parties from entering parliament.

He says towns will be able to use their Kurdish rather than Turkish names, and education in Kurdish will be broadened.

However, Kurdish politicians said the reforms were insufficient.

The ending of the ban on women wearing headscarves in public service has been a longstanding goal of Mr Erdogan’s AK Party.

The ban has been one of the most contentious laws in Turkey – pitting supporters of Turkey’s secular constitution against those who favour Islamic rights.

The reforms are a long-awaited move to improve the rights of Turkey’s Kurds, who are thought to make up about 20% of the population.

They are seen as a vital part of efforts to end the three-decade conflict between the government and Kurdish rebels, which has cost more than 40,000 lives.

The Kurdistan Workers’ Party (PKK) armed rebel group recently suspended its withdrawal from Turkey, which was a measure agreed with the government, because of a perceived failure by the government to make political concessions to the Kurds.

Mr Erdogan said the law under which only parties which get 10% of the national vote can take up parliamentary seats could be replaced by a 5% threshold, or even abolished completely.

The law has in the past prevented the main Kurdish party, Peace and Democracy (BDP), from campaigning for parliament – though its members have often run as independents and clubbed together as MPs.

Parties would only have to win 3% to qualify for public funding – as opposed to 7% currently.

Mr Erdogan also said teaching in Kurdish – and other non-Turkish languages – will be allowed in private schools; though it is still restricted in state schools.

And he said towns would be allowed officially to take their native-language names. This is thought likely to lead to the Turkish-named city of Tunceli being given its Kurdish name, Dersim.

Other measures in the “democratisation package” included:

But the co-chair of the pro-Kurdish Peace and Democracy Party (BDP), Gulten Kısanak, said: “This package do not… fulfil Turkey’s needs for democratisation.”

And BDP MP Sirri Sakik said the package did not address what were seen as judicial injustices.

“The anti-terror courts are still working. Around 1,000 Kurds will not be released from prisons.

“Little changes are presented as favours to the Kurds. Mother tongue can only be thought at private schools? My language is God’s gift to me, how can it be limited?”

He announced plans to return land belonging to the Syriac Christian Mor Gabriel Monastery, which had been seized by the state.

The prime minister did not announce some expected measures, like concessions to the Alevi Muslim minority and the Greek Orthodox Church, but he declared: “This package is not a first and will not be the last of such reforms.”